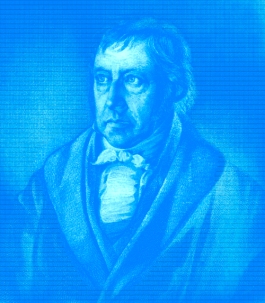 The title of this blog (which is also the title of my book in progress) is meant to evoke a quote from Hegel “[Spirit] obtains its truth only when, in its absolute disruption (absoluten Zerrissenheit), it finds itself.” This may inspire the questions:

Why Hegel? Why now? Žižek has proclaimed this “Hegel’s century,” but then Žižek is also known for milking provocative claims for all they are worth. So that alone doesn’t get us very far.

Evoking Hegel at this moment might seem particularly anachronistic; indeed many would describe him as the ultimate dead white male. If that weren’t enough, Hegel has the potential to represent everything that Postmodernists criticize about modernity—Western triumphalism, a totalizing system, the rationalizations of colonialism and Orientalism. On top of which, the Phänomenologie des Geistes is a baffling text about which there is much disagreement. This would all seem to make a Hegelian revival even less plausible. So why is such a revival currently ongoing?

ALL ROADS LEAD TO HEGEL:

Part of the renewed interest in Hegel has to do with the end of Marx. When Soviet Communism collapsed, Marx became less threatening. In the 1990s, he was spoken of as dead and it was in this same period that class seemingly vanished as a popular category in the U.S. and elsewhere. The 2000s have led to a limited resurgence of Marx in a kind of declawed, less political, less empirical, and less economic guise. Once class and economic specifics are stripped from Marx he starts to look more and more like Hegel. What is more,  with capital run rampant today beyond the worst fears of Das Kapital, Marx runs the risk of seeming dated. While I am not alone in thinking that some version of Marx is still relevant to the current economy, the case now has to be made; and for many, the Marx that seems most appealing is the philosophical Marx of Die Deutsche Ideologie and the Theses on Feuerbach, etc. This is a Marx vigorously engaged with Hegel. For these reasons, a whole crowd of scholars who otherwise define themselves as various kinds of Marxists (Žižek, Jameson, etc) have spent the last decade reaching back behind Marx to recover the Left-Hegel.

Although I think the status of Marx is the biggest reason for the Hegel resurgence, it isn’t the only one.

Another reason for the recent popularity of Hegel has been Spinoza’s comeback. There is way more to be said about this subject than I have space for in this post, but suffice to say, 1) historians like Jonathan Israel have made Spinoza the face of the “Radical” (read good or leftwing) Enlightenment and have tried to separate Spinoza and his intellectual heirs from the Conservative (read religious or rightwing) Enlightenment that has been so roundly criticized by a generation of Postmodernists; and 2) the popularity of Deleuze and company has turned attention toward Spinoza as a key inspiration for their ontological moves (I’ll probably have more to say about this in a later post, especially because these two readings of Spinoza are in contradiction). In light of this it appears that Spinoza, like Marx, can become a ‘gateway drug’ for Hegel because there is one fairly mainstream reading of Hegel (that I largely endorse) that sees Hegel as working out a basically Spinozan project. Folks like Macherey will suggest that Hegel fundamentally misunderstood Spinoza, but even so the depth of Hegel’s engagement with Spinoza makes Hegel a natural subject for anyone engaged in reading Spinoza. The appeal of Hegel only increases once Spinozists try and work out a concept of history based on Spinoza, this forces them to either become Hegelians or to justify their differences from Hegel.

If this weren’t enough, in Germany, as I learned recently, Hegel apparently never really fell out of popularity, while elsewhere on the continent the persistent importance of Heidegger seems to be leading a new generation of scholars back to Hegel (e.g. Catherine Malabou, Karin de Boer). In effect, all of these are evidence that Hegel is so closely tied to the philosophical cannon in important and intersectional ways that revivals of other European thinkers would seem inexorably to spill over into increased interest in Hegel.

THE POWER OF THE DIALECTIC:

If this explains some of the buzz around Hegel, I have a particular rationale for turning to his work. For me the most relevant part of Hegel’s thought is the dialectic. This isn’t the vulgar thesis-anti-thesis-synthesis story you’ve probably heard, but the richly more fascinating description of the movement of thought described by Hegel throughout his work, but especially in The Science of Logic and the so-called “Encyclopedia Logic.” The interesting thing for me about this part of Hegel’s thought is that he is deeply concerned with working out both a philosophical system in the face of skepticism and in describing the way thinking progresses through contradictions.  Both of these aspects of his system seem to promise a way past the impasse of a postmodern skepticism (or anti-foundationalism) that has seemingly put a stop to the possibility of all knowledge. I’ll concretize the insights I think he can impart in later blog entries, but suffice it to say that if you take Hegel’s dialectic seriously it suggests that instead of rejecting or countering Postmodernism, we can work through it and come out the other side (even richer for the experience).

In effect, terms like “post” and “anti” that we see all over the place (postmodernism, poststructuralism, the new horrible term “postsecularism,” as well as anti-essentialism and anti-foundationalism) all seem to be describing forms of negation. Each of these describes a system predicated on undoing its predecessors, but just as Hegel would anticipate, these negations are incomplete. For example, how much postmodernism has failed to escape modernism can be seen in its very name. Its central concerns are the same as those of modernism even if selectively reversed. I follow Jameson here in reading postmodernism as basically late-stage modernism/capitalism….

The other reason Hegel becomes relevant is because of precisely one of the things he is criticized for—trying to think the totality. The contemporary world-system—everywhere interpenetrated with flows of capital, saturated with collective popular culture, and increasingly enchained into a single communicative sphere via the internet—seems especially well-suited to a kind of Hegelian analysis.

Again, I promise to say more on these issues in later posts, but as I conclude I want to make sure that I don’t give the impression that Hegel is all I will be talking about (or even that he is the center of my project). I’m actually much more interested in later thinkers of the Dialectical Tradition (aka Frankfurt school folks, etc) and I’m most comfortable theoretically with thinkers like Foucault, but even so I am unable to escape the current allure of Hegel.